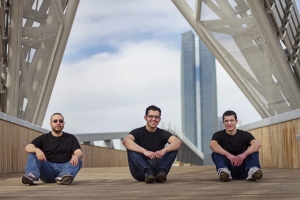 BMM sat down with Pittsburgh rockers The Black Moon. Here is the low-down.Breaking Music Magazine-  The new E.P. is called Drowning In Dreams. What’s the story behind it?
The Black Moon – Its an album themed around nightmares, dreams, and harsh realities. whether they’re good or bad it takes dreams and turns them into realities.
BMM –   Where did you get it recorded and how was your experience? What was that like, how did that come about?
TBM – We recorded the album with Tate Music Group in Oklahoma city. It was a pleasurable experience for us all. The roads were rough and the driving was quite extensive, but our trip was well worth the hardships of traveling. We sent TMG a recording of Drowning In Dreams, they loved it and immediately offered us a contract.
BMM –  If you could curate a festival, what would your dream lineup be?
TBM – Our dreams lineup would include the following: Rush, Led Zeplin, Bayside, Pink Floyd, Tom Petty and The heart Breakers, and the Steve miller band.

BMM – Your new single is called “Whiskey Breath” , what’s the story behind the song?
TBM – Its a story about vices and the hold they have on you. Its all about wanting to escape that fantasy world to live in a more sober reality.
BMM – What’s the scene like in Pittsburgh? I heard about the Zombie themed Release show! Tell me more!
TBM – Pittsburgh is the capital of the undead, Its nothing new to hear that zombies are hot right now. However, we have plans to make this Halloween city proud by throwing an epic Zombie Prom with prizes, give-aways, door prizes, candy, crowns, costumes, and fantastic new music On October 19th at The Rex theater  on East Carson St.
BMM – Can you take us through your writing process?
TBM – It all starts with a theme or concept. We then create the music to go with the song after creating a distinct feel with the lyrics. By doing it this way we can be sure to fit the music properly with the lyrics.

BMM – Is your music distributed? Where can people pick up a copy/digital copy?
TBM – Yes we are distributed through Tate Music Group and it can be purchased on www.tatemusicgroup.com. Our National release date will beNovember 5th, and we will be available on all digital platforms.
BMM – What’s the craziest thing you guys have been through, seen as a band?
TBM – Well as a whole we have all had many things to overcome both individually and as a group. Brandon and Eli are both legally blind and have a rare retina disease called Retinitis Pigmentosa which causes night blindness, and creates more of a challenge to perform shows virtually completely blind. Luke has a a rare skin disease known as Erythema Multi Forme Major that usually puts him in the hospital for a few weeks at a time. We have had to over come these issues for many shows, band trips, and over all functionality of success. But fortunately  we have succeeded and overcome our obstacles in our time together as a band.
BMM – If you lie to me about how your band got together, and include a crazy story, you can then plug anything you want.
TBM – The way we met as a band is a kind of morbid story actually. Eli and Brandon’s Grandmother had passed away, Luke had only talked to Brandon and Eli a few times over the years at family events prior. Luke went to the funeral to pay respects and ran into Eli while smoking a cigarette outside who mentioned they needed a new member. Luke was more of an acoustic/indie type of musician and when he went to try out for the band The Black Moon was an all instrumental heavy metal band…needless to say our beginning was a frustrating and rough start. But, over time the many different influences of all of the members created the unique indie progressive rock sound they have today. Although our beginning was kind of a dark circumstance it ended up creating a bright future for us and we are thankful that we were brought together.
To check out our unique sound go to (www.Reverbnation.com/theblackmoon) or to (www.theblackmoonband,com)
BMM – Thanks for answering these questions. What’s the rest of 2013 look like for The Black Moon?
TBM – We are having a Zombie Prom  show October 19th and are hoping to set up a tour soon after. We are currently working on our next project and hope to record and distribute our new music sometime in 2014.