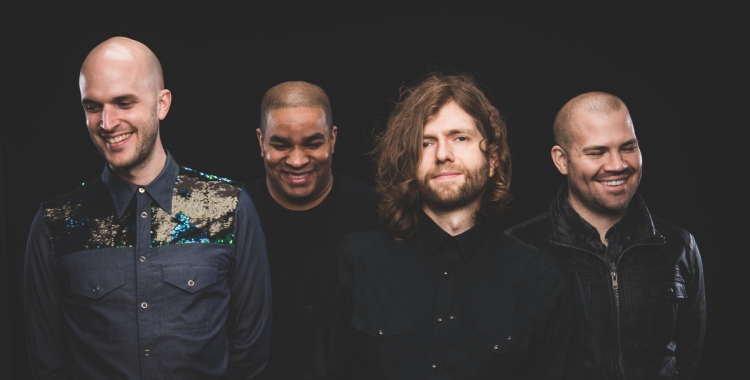 Currently gigging around Austin, TX for SXSW, the progressive indie rock band Molehill has released the official music video for their single “Hearts on Fire”. The song is the title track from their new EP (releasing on May 12th) and was inspired by the “Euromaidan” protests in the Ukraine, the birthplace of vocalist Peter Manhart’s mother.

“We wanted a video that would reinforce the lyrics and message of the song while also adding additional layers through the visual format,” says Manhart. “Over a couple phone calls with director Matt DiMare, we were all on board with using footage of protests and revolutions. We also tossed around the idea of people being forced to watch this footage in almost a Clockwork Orange – type scenario. Matt came up with a storyline for the video which we all loved – the ‘angel’ character, played by Kit Hamlen, finds Peter walking through downtown Chicago like a zombie, unaware of his surroundings (not an unusual sight in any city these days), takes him to this strange building and forces him to watch protest footage and ‘pay attention.’ He sort of ‘wakes up’ out of his previous state and takes to the street himself to carry on her work.“

“Hearts on Fire” was produced and engineered by J. Hall and Molehill, and is available on Spotify and iTunes. Pre-order the EP here.

About Molehill:
Molehill had humble beginnings in small local venues in Champaign, IL, and has since grown into an established presence in the Chicago music scene. They have played over 300 shows between the Midwest and Eastern United States, including some of the more prestigious venues in Chicago, as well as national (and international) festivals like Summerfest, Musikfest, SXSW, and Canadian Music Week in Toronto. Molehill has built a reputation for explosive live shows and a tireless work ethic, as well as the work they’ve done towards fostering a more friendly and cooperative music community in the city of Chicago. They were one of the founding members of the Chicago Roots Collective, which was a 10-band collective working together to promote the Chicago music scene and their music, and for the last 2 years Molehill has curated a monthly email list to dozens of local bands to try to promote live music in Chicago and encourage local bands to attend shows, discover new bands, and support each other even more.

Peter Manhart, lead singer, lyricist, and guitar player, started playing piano at the age of 3. At the University of Illinois, he pursued a double major in engineering physics and piano pedagogy, but dropped the piano major after 2 years so that he could focus his practice time on the guitar. He went on to get his physics degree, but also took numerous creative writing and poetry classes to develop his lyric writing ability. After moving from Champaign to Chicago, Peter met bassist Trevor Jones, who was studying double bass at DePaul University. Trevor had spent a large portion of his life in various orchestras and has always had a penchant for well organized noise, whatever the genre. He also grew up watching his father, a music professor, manage and play in a 16-piece jazz big band. This instilled in Trevor a strong business and management sense, and helped him complement Peter not only musically but with the business aspect of the band as well. After Peter and Trevor started working together, drummer Devin Staples joined the group. Devin has been a fixture in the Chicago gospel scene for years, and had also been a member of two highly-respected Chicago bands, NYCO and Cassius Clay. The 4th and final piece of the puzzle, keyboard/synth player Greg Van Zuiden, joined soon after. Greg had recently graduated from Illinois Wesleyan University with a music degree, moved to Chicago, and was looking for a band to join. As the youngest member of Molehill, he was the light-hearted “glue” that helped the band stay strong.

The Hearts on Fire EP continues the group’s tradition of storytelling in music. The dark, brooding “Old Soldier” tells the story of a proud, religious, soldier, living out his last days in a nursing home – “And he sits in a dead room, sterilizer and perfume, and the lights are slowly growing dim.” “Reverie” has the narrator lamenting the loss of a parent long ago, while also thanking that parent, for “you made me the person I am.” Last but not least, the title track was inspired by the “Euromaidan” protests in Ukraine – the birthplace of Peter Manhart’s mother. The song is about the common people rising up to fight an oppressive regime. Though the people in this protest were unarmed, the government sent riot police and snipers to kill them, and yet the people’s numbers kept growing until they were finally heard. This song is about the strength of community, sheer willpower, and the resonance of a good and virtuous idea. Though the few in control may try to keep the will of the people down, the masses can change the world if they fight together. With the recent wave of public dissent and protests happening around the world, this seems like the appropriate time to share this song.