Metal / Punk / Industrial band THE CLAY PEOPLE have released the official music video for their single, “GenRX.” Originally premiered on Games, Brrraaains & A Head-Banging Life, “GenRX” is off of their latest album, Demon Hero and Other Extraordinary Phantasmagoric Anomalies and Fables, and features Chris Wyse (Hollywood Vampires, Ace Frehley, The Cult) 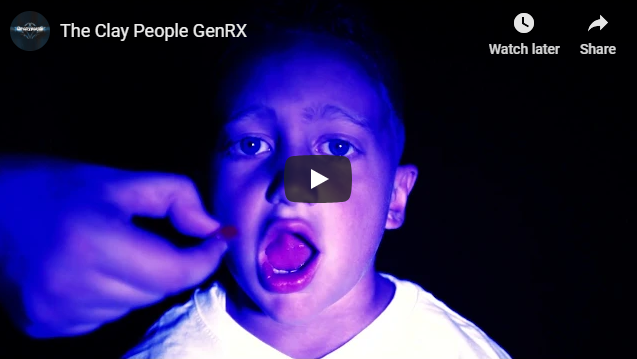 “Imagine all the elements of a category 5 hurricane, and right in the middle of that storm is the most beautiful sunset… that’s The Clay People.”

Imagine all the elements of a category 5 hurricane, and right in the middle of that storm is the most beautiful sunset… that’s The Clay People.

Whether it’s seeing a live show, or just listening to TCP, there’s a connection made very quickly between band and audience. A sense of comfort, knowing if you had a rough day, or are feeling down, that you can count on TCP to take you away from all that

The Clay People return on Demon Hero and Other Extraordinary Phantasmagoric Anomalies & Fables, an album that captures the band at a creative peak, and was forged from what was at times a tenuous, cathartic, and finally unifying recording process.

On Demon Hero Neet takes on the corrupting influence of modern politics, the silver tongue of the modern demagogue, the ills of groupthink, and the band’s experience with the music industry. “I’ve been plagiarized. I’ve been beat up. I’ve been manipulated… .And we’ve got nothing left to lose,” Neet confesses on the anthem “Bloodletter.”.

“Awake” was featured in films such as Strangeland, Universal Soldier 2, and Marked For Death.

The band called in extended members of its musical family to contribute to Demon Hero. Chris Wyse of The Hollywood Vampires, Ace Frehly, The Cult, and OWL, contributed bass to the band’s reinterpretation of fan favorite “Strange Day” and “Gen RX.”. Walter Flakus of Stabbing Westward, and one-time Clay People member, contributed keys. Wade Alin, who added programming to the band’s self titled release, returns on Demon Hero.

Dinsmore and McGarvey produced the album, turning to producer Neil Kernon (Nile, Queensrcyche, and Nevermore) for the final mix.